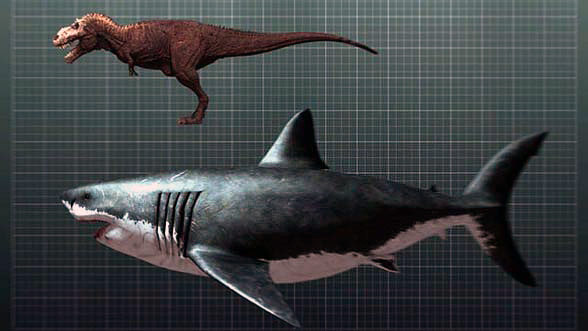 Is Megalodon Still Alive?
West Palm Beach, FL, June 8, 2016 — It was the most fearsome creature ever to inhabit the planet; a 70-foot, fifty-ton prehistoric Great White shark. Its jaws were large enough to devour an elephant whole and were filled with 7-inch razor-sharp teeth. And if that doesn't scare you, consider this – Carcharodon Megalodon may still be out there, inhabiting the unexplored deep waters of our oceans.Most scientists would disagree. According to popular theory, a drop in sea temperatures during the last Ice Age altered whale migration patterns, affecting the giant shark's major food source. The experts back this up with a simple statement: We haven't seen or videotaped a Megalodon, therefore these monsters no longer exist.But the author of MEG, a fictional thriller just greenlit for a major motion picture says, "not so fast!”In Steve Alten's best-selling thriller, MEG (Viper Press, 2015), not all Megalodons died off. Faced with colder seas and a new threat which hunted along the surface in packs (Orca), navy submersible pilot-turned paleobiologist Jonas Taylor claims the creatures went deep. Some ended up in the Mariana Trench, the deepest gorge on the planet – a 1,550 mile-long, 40 mile-wide unexplored realm seven miles deep; its seismically-active sea floor warmed by large fields of hydrothermal vents. The vents superheat the water, the minerals engage the process of chemosynthesis, and suddenly you have a thriving food chain... topped by Megalodon.Before you dismiss the author's theory – last week a new exploration into the Mariana Trench confirmed the existence of both hydrothermal vents AND sea life flourishing in these deep waters – exactly as Steve Alten wrote about in detail 20 years ago!So... could Megalodon be the next sea creature discovered?"You never know,” says Steve Alten, whose fifth installment of the MEG series, MEG: Nightstalkers (Tor/Forge) debuts in bookstores this week. "While most marine biologists would say it's unlikely, it's just as unlikely that Megalodon suddenly perished because the oceans grew colder. Like our modern-day Great Whites, Megalodon would have been warm-bodied, their moving muscles generating heat to their extremities in a process known as gigantothermy. And there are plenty of things in the sea to eat besides whales – which there were still a lot of. But the Orca threat was real. They would have stalked Megalodon nurseries and – attacking in large numbers – would have overwhelmed a solitary adult shark. It's precisely for this reason that Megalodon would have gone deep, out of the hunting range of these air-breathing mammals.”Seventy percent of the Earth is covered by water, and yet only 5% of the oceans have been explored; less than 1% of the very deep. Adds Alten: "We discover new sea creatures all the time, including some very large sharks in the deep waters. Keep in mind, Megalodon was not a dinosaur that died off 70 million years ago, it was a shark that lived over most of the last 30 million years and shared the same seas as prehistoric man. As for assuming that these sharks no longer exist just because we haven't seen one – that's not science. If these monsters were living in the vast mid-waters and deep waters, there'd be no reason for them to surface... and anyway, who'd be there to see it?”Soon we'll all be able to see a seven-foot dorsal fin cutting the surface. Warner Brothers greenlit the MEG movie, to be directed by Jon Turtletaub, starring Jason Statham as Jonas Taylor. Book trailers, free excerpts, and movie updates can be found at www.SteveAlten.com.  ; Steve Alten's brand new version of MEG is in bookstores and on Amazon.com. About the Author:Steve Alten is the NY Times and International best-selling author of fifteen novels, including the MEG series and the DOMAIN series, about the Mayan 2012 doomsday calendar, which was #1 in Spain, Mexico, and Argentina. He is also founder and director of Adopt-an-Author, a secondary school reading program used by thousands of teachers in the U.S.