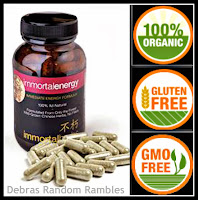 I was sent a 3 day sample of Immortal Energy for my honest review.
All the opinions are my own.
The boost you get from taking this is not a jittery panicky kind of boost like I had with the 5 hour energy stuff. It is a more of a boost to help keep you going. I did not experience any side effects besides feeling more awake. I really did like it. As a mom of 7, with 6 at home, I need all the help I can get to keep going sometimes!
Immortal Energy™ is a blend of Chinese herbs that have been used in Chinese medicine to restore your body to its optimum state. In Traditional Chinese Medicine (TCM) it would be said that the tonic herbs in this blend are mostly “Qi” tonics. But it also has a few “jing” tonics as well. In TCM it is said that “our Jing is our foundation and you cannot build a strong house without a good foundation.” Certain Chinese herbs have been used, for thousands of years, as remedies for weak Jing, to help rebuild and replenish this all-important energy of one’s vital essence. This herbal tonic is the Chinese version of energy food.
Some of the ingredients:
(copied off another site)
DEER ANTLER (LU RONG)

Deer antler is widely used in Asia, and now throughout the world, to strengthen adrenal, reproductive and brain functions. It is mainly used as a rejuvenating agent. Short term use is believed to quickly build strength and power, while consistent long-term use is believed to re-build deep life force, preserve youthfulness and to enhance longevity.
Numerous studies done in China, Japan and Korea have shown that the pantocrine in deer antler increases work capacity, decreases muscular and mental fatigue, and improves sleep and appetite. Deer antler has been shown to increase the oxygen intake of the brain, liver and kidneys in laboratory animals. It also significantly increases red and white blood cell production in laboratory animals, with the effects improving as dosage is increased.
Deer antler extract provides minerals, amino acids, and other nutrients including the insulin-like growth factor IGF-1.
Clinical trials have shown that IGF-1 may:
Enhance immune functions
Increase muscular strength and endurance
Possess anti-inflammatory properties
Possess growth-stimulating properties
Help regulate low and high blood pressure
Help promote sounder, more refreshing sleep
Improve eyesight, including night vision
Help reduce cholesterol and triglycerides
IGF-1 is also an important supplement for people interested in reducing the signs of aging and for those people interested in living the longest, healthiest, and most active life possible.

For centuries people have used astragalus root to enhance strength and regulate metabolism. The herb has only recently gained popularity among herbalists and practitioners of alternative medicine in the West. Chinese medicine uses astragalus root to enhance the body’s energy, known as “qi”. Astragalus root is a mild diuretic, and it can help to reduce perspiration as well. In traditional Chinese Medicine, all of these uses are attributed to the ability of astragalus root to replenish “qi”, so a person who is ill can regain strength and immunity. Astragalus root is also been shown to protect the adrenal cortex, the gland that produces hormones related to stress. It may also help allergy sufferers by strengthening the immune system’s response to allergens in the environment.

Ginseng is used for improving thinking, concentration, memory, work efficiency, physical stamina, and athletic endurance which have a significant impact on our energy levels.
GOJI (GOU QI ZI)
The nutritional and medicinal benefits of goji berries are legendary. Goji berries are very high in antioxidants and have great anti-inflammatory properties.
In Traditional Chinese Medicine goji is used as a blood and immune system tonic. It supports vision, is a mood elevator, and is known as “the happy fruit.” One of the most famous herbs in Asia to promote beautiful skin. It can improve memory, and increase libido.

Schizandra is known as the five-flavor fruit; it has each of the five flavors (sweet, spicy, sour, salty, and acidic).  It’s one of the most famous herbs used in Chinese medicine. This herb is considered to be one of the premium mind tonics of herbalism. It is used to sharpen concentration, improve memory, and increase alertness. Yet, unlike caffeine-like stimulants, schizandra does not produce nervousness when increasing energy. In fact, some people consider schizandra mildly “calming” while producing wakefulness and improved focus.

The products and the claims made about specific products on or through this site have not been evaluated by Immortal Herbs or the United States Food and Drug Administration and are not approved to diagnose, treat, cure or prevent disease.

The only downer for me is the price. $59.95 for a bottle. Since Im on a stricter than strict budget for the holidays, this may be a tax return purchase.
.

I received one or more of the products mentioned above for free using Tomoson.com. Regardless, I only recommend products or services I use personally and believe will be good for my readers. 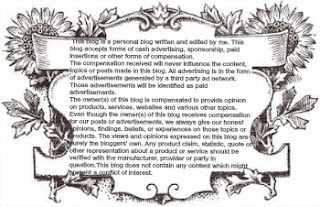